School Pastor Karen had news of a second school taking part, Adam Eakins talked of the success of AHoF in the park, Joe Story shared some plans for a really useful charity shop – no wonder he looks happy! Steve challenged everyone  with John 17… so that the world may believe; we added the names of churches to the cross and prayed “may they all be one”. 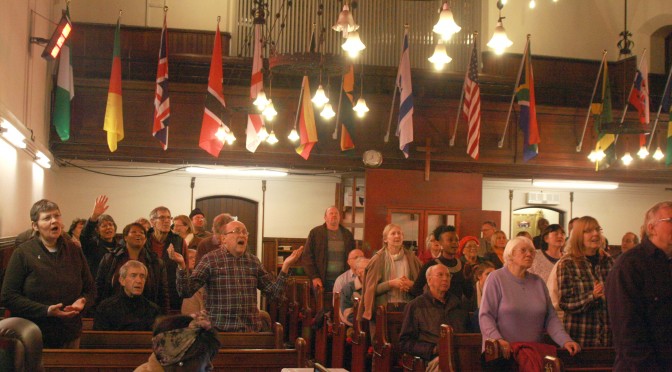 Prayer and Praise for Northampton is held in different churches on the first Monday of the month. Recent photos from the New Testament Church of God and All Nations were taken by Antony Denman.

In December 2014  Helen Boardman spoke about the Force Fire and Faith meeting to be held – with the Police Force, Fire Brigade and Faith leaders – to make Northamptonshire the safest place in England.

In January 2015 Nick Amis came from the Cinnamon Trust to speak about the Faith Audit which is now being carried out, to inform the government of the many good works done by all churches in the county.

In February, Robert Chirgwin spoke about the Prayer Call of 1784, in which it was said that:
The grand object in prayer is to be, that the Holy Spirit may be poured down on our ministers and churches, that sinners may be converted, the saints edified, the interest of religion revived, and the Name of God glorified.
Over 200 years ago, meetings began on the first Monday of the month. . .  sounds familiar.