There is a much greater open-ness and co-operation between Christians from different churches and denominations, and music can often help to break dividing walls.
Ecumenical news from Northampton and the surrounding area is featured here on this page.

and continues on the first Monday of every other month.

CTE 2018 FORUM: Together in God’s Mission

The broadest ecumenical representative gathering of Christians in England – last September at The Hayes Conference Centre, Swanwick.
Reports, photos and videos from  Churches Together in England here

CTE Conference 16 to 18 October 2017 at The Hayes Conference Centre, Swanwick, Derbyshire
Link to a fascinating Report and Reflection
on this unique conference HERE
As well as providing musical accompaniments,
“One metaphor we were given is of us all as 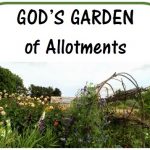 allotments in God’s garden, rather than as
having our own private gardens.”
This then inspired a graphic illustration of  Allotments  as a way of showing how churches sometimes get on with their neighbours! See pdf: God’s Garden of Allotments

A new walk of witness on Good Friday in 2017 from Westone to Weston Favell Shopping Centre  was led by people of all ages from local churches.
What’s good about Good Friday?
That was the question behind this unique journey together. Walking through the shopping centre singing Jesus remember me when you come into your kingdom,  in beautifully improvised harmony, over forty people then gathered at the Community Area outside Tesco, to watch a short drama based on hands, followed by the song How deep the Father’s love,  with sign language to bring the words to life more deeply.  A Gospel reading and some reflections led to When I survey the wondrous cross, which many people joined in, and finally Here is love, vast as the ocean – gave just a hint of God’s great love for Our Community – on Good Friday. 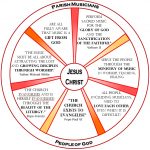 Towards harmony in the post-Reformation church
was the subject of the RSCM’s International Summer School held in Liverpool, with liturgies at the Metropolitan and Anglican cathedrals, growing harmonious relationships between musicians from different traditions and countries.

In a talk on Music and Liturgy for Parish Mission and Ministry, Teresa Brown described music as one of the wheels that keeps the liturgy moving in a parish.
See this illustration of PARISH MUSICIANS IN HARMONY for discussion.

THY KINGDOM COME
PREPARING FOR PENTECOST IN 2017 :
AN ECUMENICAL PENTECOST NOVENA

As a resource for this year’s THY KINGDOM COME prayer initiative, this Ecumenical Pentecost Novena may be used between Ascension Thursday and Pentecost Sunday.

This service was devised by the Diocesan Evangelisation Team in Northampton. It encourages Catholic churches to invite neighbouring Christian churches to join them in prayer together for a new outpouring of the Holy Spirit in our own lives, upon the Church and the whole world.

Copies of the Ecumenical Pentecost Novena in English and Polish can be downloaded from here.

Churches Together in England
CTE website
with Reflection of the Month:
“Ecumenical Choir wants an Encore!” here

PAST EVENTS
21st January 2015 Northampton Cathedral
A Celebration of Ecumenism in Northampton
Bishop Peter Doyle invited church leaders from across the four counties of the diocese and from Churches Together in England, to Northampton Cathedral to celebrate the 50th anniversary of the Vatican Council’s decree on Ecumenism – Unitatis Redintegratio – during the Week of Prayer for Christian Unity.

The congregation that filled the cathedral were delighted to see the diversity of clergy gathered from a variety of traditions, seated in a semicircle around the altar. Greek Ecumenical Patriarch Archbishop Gregorius read the Gospel and the preacher was the Archbishop Bernard Longley of Birmingham.

A choir of 50 singers was recruited by the Cathedral’s Director of Music Teresa Brown to lead the congregation in song and end the evening on a joyful note with the Hallelujah Chorus!

Link to photos of the choir and details of the music on this page:
ECUMENICAL CHOIR

21 June 2014 St Augustine’s Church, Milton Keynes
“Ecumenism: The Joy and the Challenge”
This meeting of the Ecumenical Commission of Northampton diocese included the opportunity to see what Pope Francis has to say about Christian unity in these two short videos:

YOUTUBE: Pope Francis on Catholics, Orthodox and other Christians

They were followed by some fascinating discussions and sharing with Bishop Peter Doyle and representatives from parishes and their ecumenical friends.