Devine Music first published music by Teresa Brown in 1992, beginning with the original Mass of St Luke, Evangelist and a collection of songs. The Devine Music website appeared in 2001, advertising Recordings, Events and Ecumenical Music.

This ecumenical dimension comes from Teresa’s experience and commitment to Christian unity, which first led her to form a group called Seeds of Unity back in 1996 and to direct music at events which encourage Christians from different churches to celebrate their faith together.

Born in London, brought up in County Durham, (hence the accent) Teresa studied music in Huddersfield, Newcastle and at Goldsmiths College, London. After many years of performing and teaching students to play the violin, she gave up teaching to become a freelance Christian musician.

In the Millennium year Teresa animated the singing of 10,000 people at Pentecost 2000 celebrations in a park in Northampton, England, forming an ecumenical choir and orchestra for the occasion. She then spent 3 months in Israel doing voluntary work in Jerusalem and gathering material for her next recording project, In Search of Peace. During that time she visited Egypt and led music for Mass at the top of Mount Sinai, in a Bedouin tent and on the shores of the Red Sea. 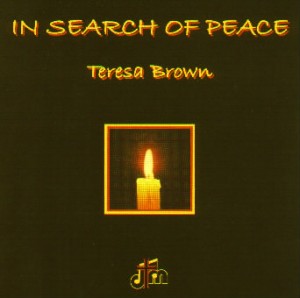 The music of In Search of Peace was eventually recorded on CD in 2003 and the music has been performed at venues all around the country, ranging from church to school, and hospital to prison, encouraging people to pray for peace in the world.

Teresa has led music for parish missions in the Catholic church with the Sion Community and worked ecumenically with the Royal School of Church Music and Churches Together in England. From 2012 onwards, Teresa was the Director of Music at Northampton Cathedral, and she also co-ordinated the music and venues of Prayer and Praise for Northampton, held monthly in different churches in the town.

Since the Coronavirus pandemic, Teresa has created a series of short videos from various recordings of her own music. These are available on the Devine Music YouTube channel. She has also completed a new setting of music for the Mass. Similar in style to her Mass of St Luke, Evangelist, the Pilgrimage Mass will be published next month.